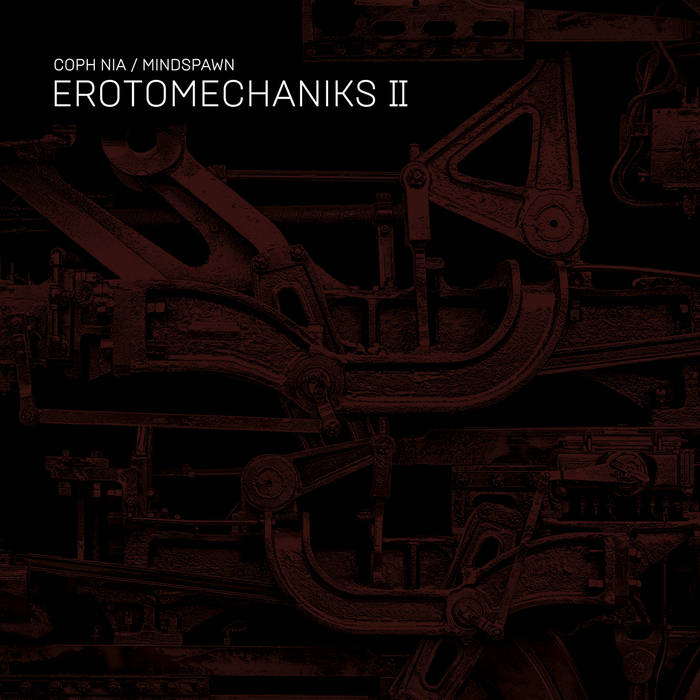 raubbau is delighted to present this transatlantic collaboration, sequel to the enormously well-received, yet regrettably rare first part of 2005. ‘erotomechaniks II’ is a dark ambient delicacy in seven parts, all very concise tracks with a defined structure, never getting lost in sound as such. the overall subject matter is perfectly specified by the title: the meeting of machinery with eroticism, of precision with yearning, of industrial with human sounds.

it was after his occult pop masterpiece ‘lashtal lace’ in 2014 that mikael aldén aka coph nia felt a certain creative drain, so obviously he turned away from the song structures and emotional range of said album and sought to return to what is his own roots as well as his shared history of dark ambient industrial with us-based artist mindspawn: gene williams is a recognized multifaceted visual and musical artist, as much a seasoned producer (active since around 1980) as he is obscure. the combination of these two creative minds makes for the special tension of their collaborative work. ‘erotomechaniks I’ was one of those albums that were received with rave reviews and enormous enthusiasm, but never found the wide audience it might have deserved due to the limited nature of its release. now, with a definite resurgence of interest in that particular style, it’s the perfect time for erotomechaniks II.

it’s from the very first hum of ‘hive mechanics’ that the listener feels a fragile comfort, an inescapable enchantment to the otherworld, before the antagonistic metal scrapes set in - and from there the trademark dualism of the album perseveres: the continued clash of the carnal with the constructed. erotomechaniks II is perfectly balanced, with the industrial sounds never pushing towards overt aggression, and the human sounds - like the subtle moans in ‘lust transformer’ - never diverting the abstract nature of the album. all of the tracks clock in around the seven-minute-mark and build an intriguing suspense; that, combined with the sublime sound design, makes erotomechaniks II a prime choice for the dark ambient massive.