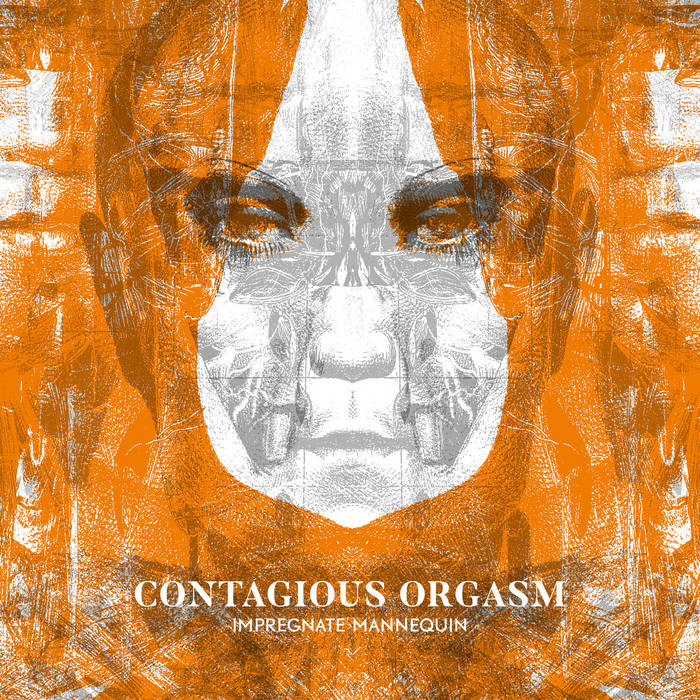 from the prolific body of work that is contagious orgasm’s discography, raubbau is delighted to rerelease a key moment: the 1997 album ‘impregnate mannequin’, originally published in a small number of vinyl copies with a delicate foldout poster, and nowadays impossible to find in proper shape. now on cd in an updated mastering quality, it reveals its compository strength and value: the title harks back to contagious orgasm’s very first full-length tape of 1987, and the album serves as the missing link between his more boisterous noisy output of the first decade, and the complex, layered ambient psychedelia that he is known for since the turn of the millennium.

‘impregnate wave body’ represents the entire a-side of the original lp and takes the listener from piercing background noise and assorted sounds of unclear origin, through treated choirs and other unexpected turns and twists. what follows are the strong ritual flavour of ‘under the wire head’ with its repetitive structure and monk chants and the heavily treated feedback loops of ‘mannequin orgasm’. a perfect opportunity to rediscover contagious orgasm at the creative peek of the 1990s, with an album that shows no signs of age and still stands as a perfect example how those with an acquired taste will find what is just noise to most highly enjoyable themselves, soothing even - and it was not least under the impression of this album that the seemingly contradictory term ‘ambient noise’ was coined.

composed, performed and mixed by hiroshi hashimoto.
originally recorded and mixed in 1986 - 88.
new remix at cool anatomy june - august 1997 nagoya.
originally released on lp in an edition of 300 copies by harbinger sound in 1997.
remastered in march 2018.
artwork by salt.